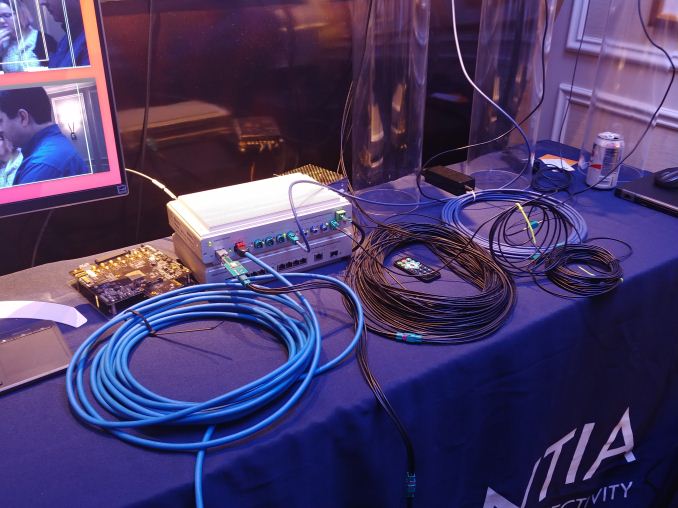 One of the lesser known topics around fully autonomous vehicles is one of transporting data around. There are usually two options: transport raw image and sensor data with super low latency but with high bandwidth requirements, or use encoding tools and DSPs to send fewer bits but at a higher latency. As we move into development of the first Level 4 (near autonomous) and Level 5 (fully autonomous) vehicle systems, for safety and response time reasons, low latency has won. This means shifting data around, and a lot of it. 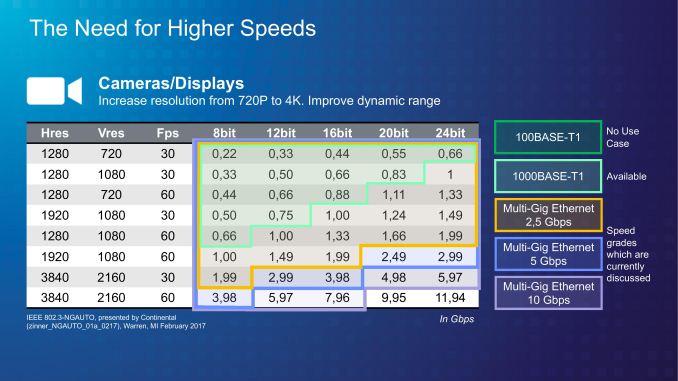 Raw camera data is big: a 1080p60 video, with 8-bits of color per channel, requires a bandwidth of 0.373 GB/s. That is gigabytes per second, or the equivalent of 2.99 gigabits per second, per camera. Now strap anywhere from 4 to 8 of these sensors on board, the switches needed to manage them, the redundancy required for autonomy to still work if one element gets taken offline, and we hit a bandwidth problem. Gigabit simply isn't enough.

The announcement today is two fold: NVIDIA and Aquantia are announcing a partnership that means Aquantia based network controllers and PHYs will be used inside NVIDIA's DrivePX Xavier platform, and subsequently the Pegasus platform as well. The second announcement is the new automotive product stack from Aquantia, AQcelerate, consisting of three chips depending on the automotive networking requirement.

For the three new chips, one is a PHY, one is a PCIe network controller, and a third combines the two. The PHY can take a standard camera inputs (2500BASE-X, USXGMII, and XFI) and send the data through multi-gigabit Ethernet as required. The controller can take standard XFI 10 Gb SerDes data and output direct to PCIe, while the combination chip is as a regular MACPHY combo, converting Ethernet data to PCIe. All three chips are built on a 28nm process (Aquantia works with both TSMC and GloFo, but stated that for these products the fab is not being announced), and qualified for the AEC-Q100 industry standard. 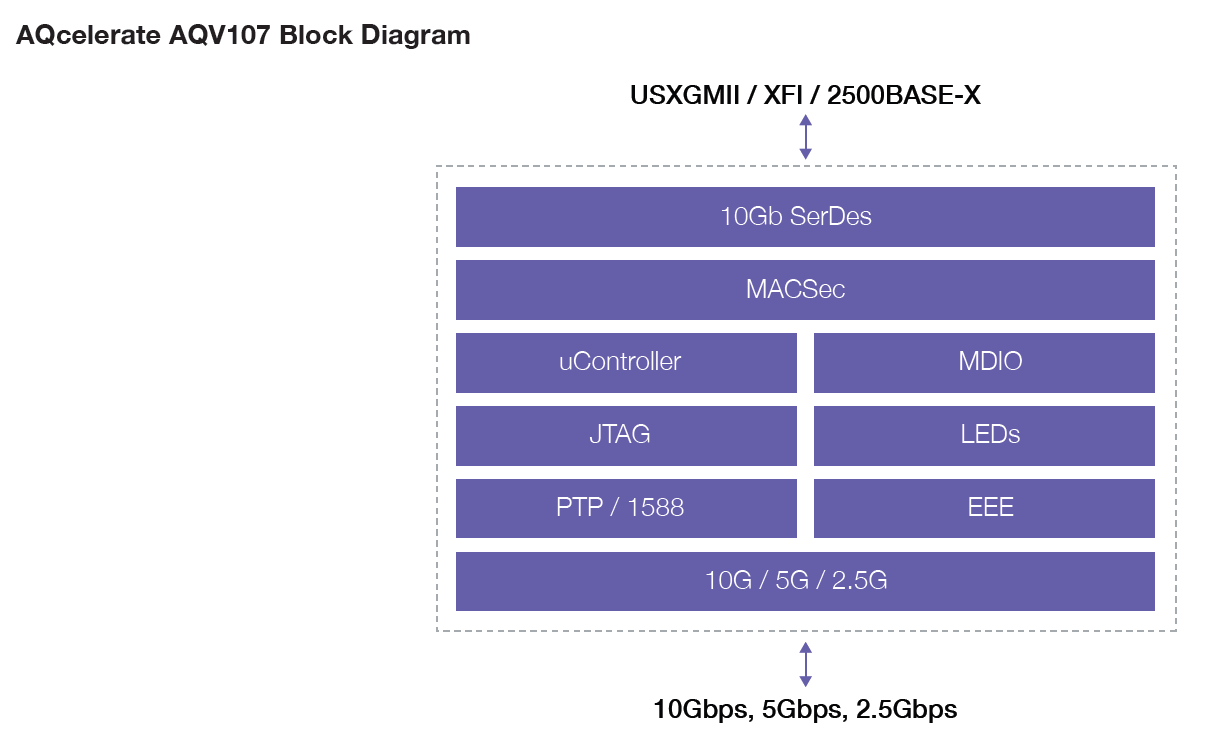 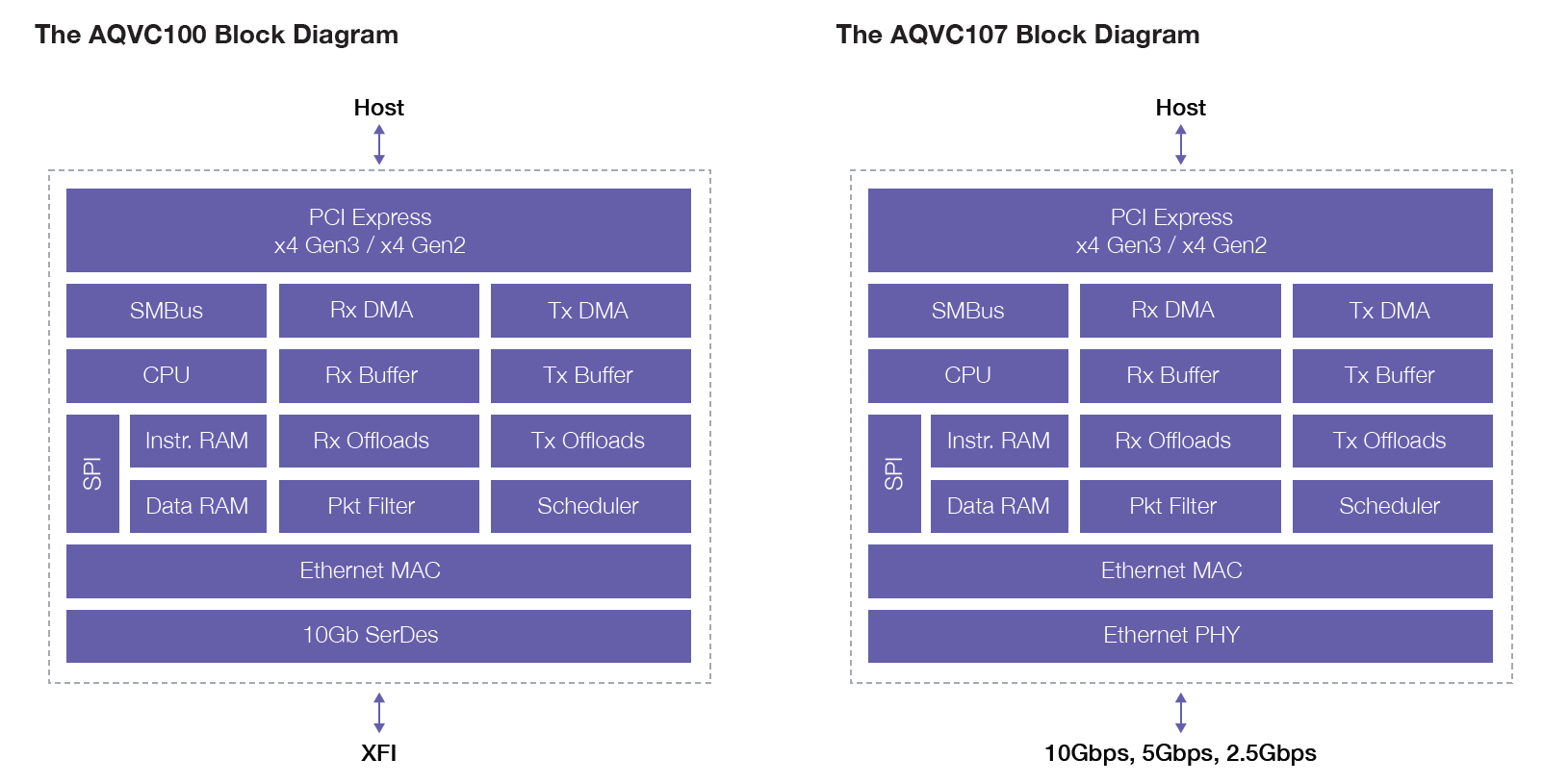 The benefits of using multi-gigabit, as explained to us by Aquantia, is that it allows for a 2.5G connection using only a standard twisted pair cable, or 5G for dual pair, up to 10G for quad pair. Current automotive networking systems are based on single pair 100/1000Mbit technology, which is insufficient for the high bandwidth, low latency requirements that companies like NVIDIA put into their Level 4/5 systems.

These chips were designed on Aquantia's roadmap before its collaboration with NVIDIA, however NVIDIA approached Aquantia looking for something to work, given Aquantia's current march on multi-gigabit Ethernet ahead of its rivals. We are told that the silicon doesn't do anything special and specific with NVIDIA, allowing other companies keen on automotive technology to use Aquantia as well. With Aquantia's lead in the multi-gigabit Ethernet space, over say Intel, Qualcomm, and Realtek, it seems that the only option at this point for wired connectivity, if you need to send raw data, is something like this. However, the lead time for collaboration seems to be substantial: Aquantia stated that NVIDIA's Gary Shapiro recorded promotional material for them in the middle of last year, however Xavier was announced in 2016, so it is likely that Aquantia and NVIDIA were looking at integration before then. 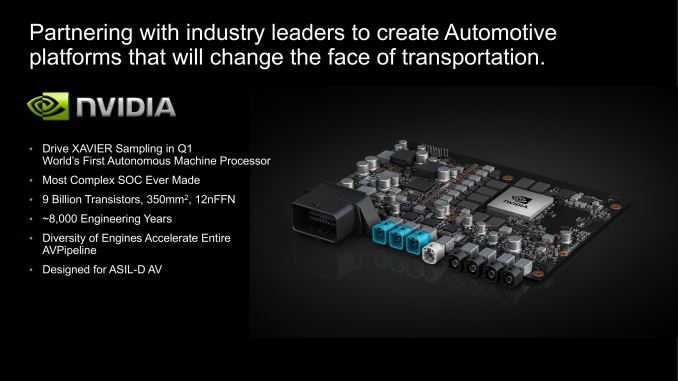 A quick side discussion on managing all this data. If there is 16 GB/s from all the sensors flying around, the internal switches and SoCs has to be able to handle it. At CES, NVIDIA provided a base block diagram of an Xavier SoC, including some details about its custom ARM cores, its GPU, the DSPs, and some about the networking. 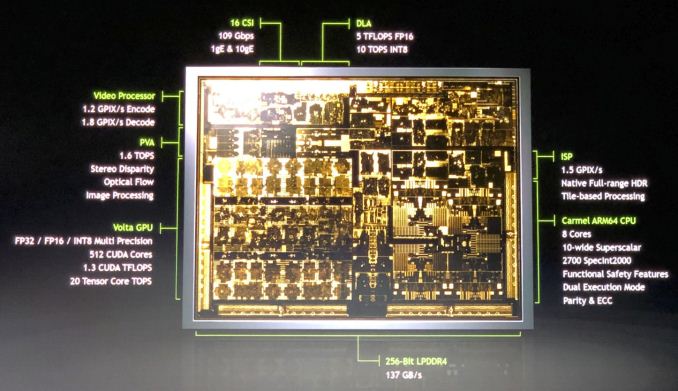 The slide shows that the silicon has gigabit and 10 gigabit embedded in (so it just needs a PHY to work), as well as 109 Gbps total networking support. On the Video Processor, it supports 1.8 gigapixel/s decode, which if we plug in some numbers (1080p60 = 124MPixel/s) allows for about a dozen or so cameras at 8bit color, or a combination of 4K cameras and other sensors. The images of the Xavier also show the ISP, capable of 1.5 gigapixel/s. 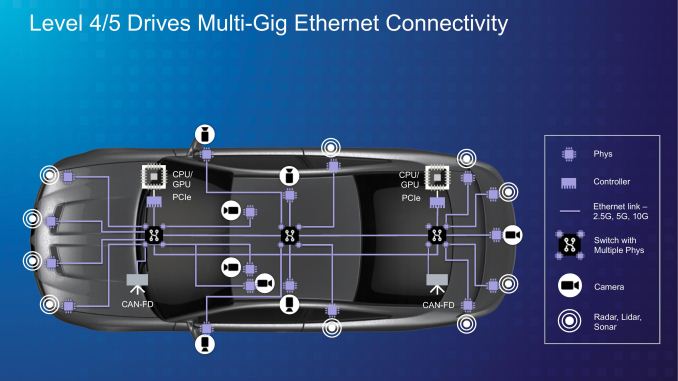 An mockup example from Aquantia showed a potential Level 4/5 autonomous arrangement, with 10 RADAR/LIDAR/SONAR sensors, 8 cameras, and a total of 18 PHYs, two controllers, and three switches. Bearing in mind that there is a level of redundancy for these systems (cameras and sensors should  connect two at least two switches, if one CPU fails than another can take over, etc), then this is a lot of networking silicon to go into a single car, and a large potential for anyone who can get the multi-gigabit data transfer done right. The question then comes down to power, which is something Aquantia is not revealing at this time, instead preferring to allow NVIDIA to quote a system wide level power.

The image at the top is the setup shown to us by Aquantia at CES, demonstrating a switch using AQcelerate silicon capable of supporting various cables, including the vital 2.5 Gbps over a single pair.