Today, VESA is announcing the first version of their DisplayHDR specification, a new open standard for defining LCD high dynamic range (HDR) performance. Best thought of as a lightweight certification standard, DisplayHDR is meant to set performance standards for HDR displays and how manufacturers can test their products against them. The ultimate goal being to help the VESA's constituent monitor and system vendors to clearly display and promote the HDR capabilities of their displays and laptops according to one of three different tiers.

For consumers, the three new logos of DisplayHDR-400 (low-end), DisplayHDR-600 (mid-range), and DisplayHDR-1000 (high-end) represent discrete and publicly defined levels of HDR capabilities. Broadly speaking, each level has higher minimum requirements for luminance, contrast, and color gamut. Compliant devices of all levels must be capable of processing HDR10 video, must utilize true 8-bit drivers without dithering, and must incorporate global or local dimming. 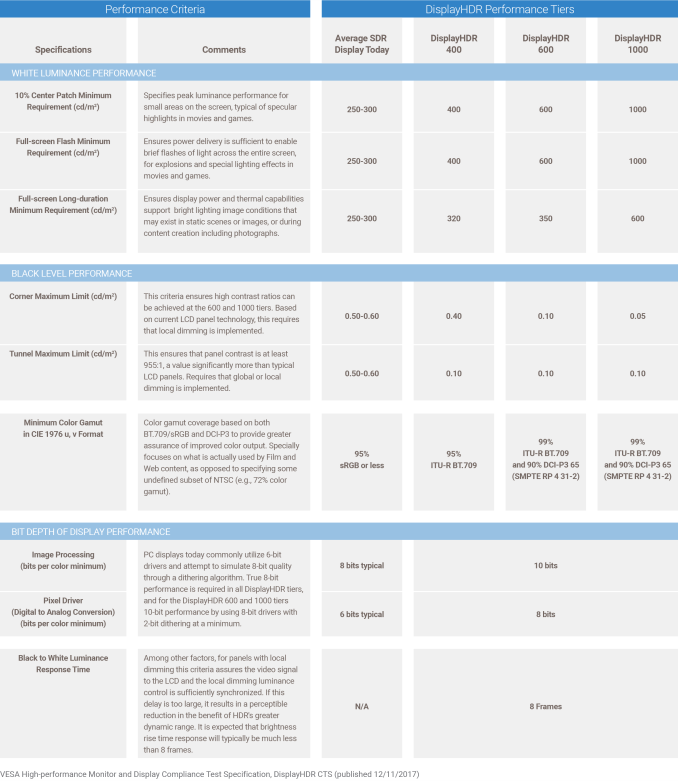 In terms of the first two luminance tests, the minimum 400, 600, and 1000 nit (cd/m2) requirements give the respective DisplayHDR tiers their namesake. At the base level is DisplayHDR-400, which for AnandTech-level enthusiasts is likely to come off as a bit disappointing/unaggressive. To the credit of the VESA, the standard tightens things up over budget LCD monitors and laptops; in particular it requires much higher luminance levels and true 8bpc color support (6+2 is explicitly disallowed). This is coupled with the previously mandatory support for HDR10, and black-to-white response time requirements. However it does not require any "advanced" features such as the DCI-P3 color space – instead allowing 95% of sRGB – and both the max and min brightness requirements are still quite tame for HDR. Based on the VESA's guidance, it sounds like this is primarily aimed at laptops, where displays are historically power-limited and anything better than global dimming is unlikely to be used.

Moving things up a notch are DisplayHDR-600 and 1000. These two standards are quite similar outside of their maximum luminance, and both are much closer to the requirements many would expect for an HDR specification. In particular, these two tiers require 10-bit color (8-bit native + 2-bit dithering permitted), much lower minimum black levels, as well as having color gamut coverage a minimum of 99% Rec. 709 and 90% DCI-P3. Gamut-wise, VESA mentioned that minimum coverage was essentially tolerance metrics by another name. Of particular note here, while the VESA does not require local dimming for any of the DisplayHDR standards, they note that they don't believe these tiers to be achievable without local dimming, at least not with current LCD technology.

Meanwhile, a requirement for all tiers of the standard is a maximum response time for black-to-white transitions, i.e. the rise time. The particular latency requirement applies to the number of frames it takes for the backlight to fully respond after receiving the power signal. Typically, latency in this area is mostly a result of smoothening algorithms that are in place to reduce display flicker, and excessively high rise times would translate to a noticable latency in brightness. For all three tiers the requirement is 8 frames at 60Hz, or 133ms. The VESA is recommending the same 8 frame standard for other refresh rates as well, including 144Hz and 24Hz.

Going forward, VESA stated that they plan to add higher DisplayHDR tiers as needed, along with support for non-LCD technologies like OLED. DisplayHDR is also agnostic to resolution and aspect ratio, as both elements are explicitly excluded from the specification, as opposed to a standard like the UHD Alliance’s 4K specific “Ultra HD Premium.” And on that note, VESA commented that any specification compliant device, including TVs, is eligible to use the DisplayHDR logo.

Along with certification via DisplayHDR authorized test centers, devices may be self-certified by vendors in their own factory manufacturing environments, as mentioned earlier. The results are submitted to VESA and after the requisite paperwork and agreements, vendors receive the right to use the compliance logos, with the devices being added to the Integrators List. This self-certification is subject to a VESA auditing process that is invoked if necessary, and VESA noted that this may also be triggered if reviewers and end-users encounter discrepant results with the public test tools, planned for release in Q1 2018. With the open compliance test specification, end-users may utilize consumer-grade devices in testing the displays, even though they lack the stricter tolerance specifications necessary for official self-certification.

VESA members and partners have had access to a beta version of the test suite for several weeks, and with that a number of manufacturers are exhibiting new products complying with the DisplayHDR specification at CES 2018, January 9-12, at the Las Vegas Convention Center South Hall, DisplayPort booth #21066. If not production-ready by CES, it appears that manufacturers expect to begin rolling out DisplayHDR certified equipment during Q1 2018.

The full High-performance Monitor and Display Compliance Test Specification (DisplayHDR CTS) is available as a free download on the VESA site.