The ST30SF and the ST45SF are externally identical, with the only apparent physical difference being the sticker on the side of their chassis. Even when it comes to the cables and connectors, the ST45SF only has one extra 8/6-pin PCIE connector, hinting that SilverStone expects the ST45SF only to be used if the PSU has to power a modern gaming graphics card. The designer’s logic is sound, as the number of drives that can be installed inside a compact chassis that has been designed for SFX PSUs usually is very limited, leaving no other device to require substantial levels of power other than a powerful GPU. 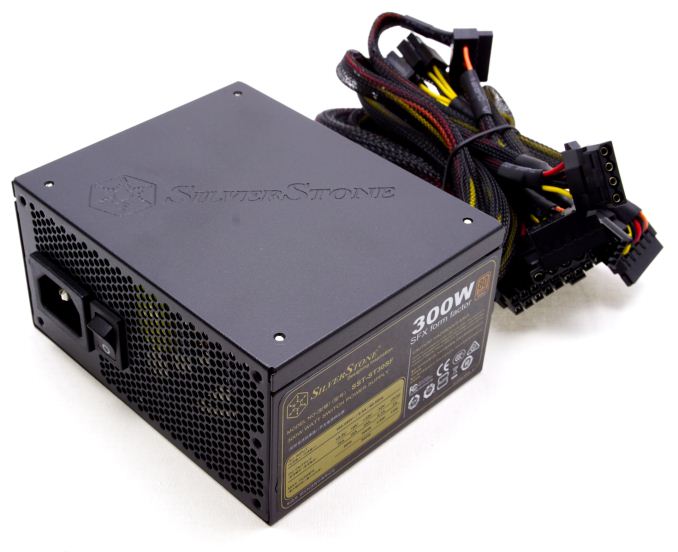 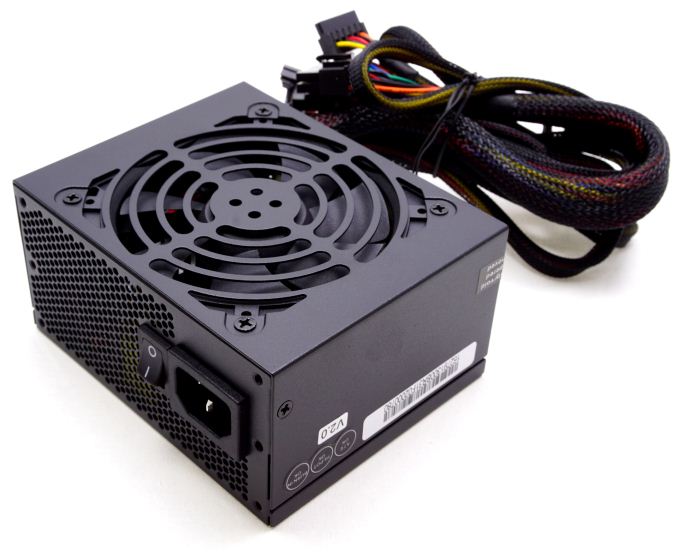 The ST30SF and the ST45SF feature a simple steel chassis that has been sprayed with a typical matte black paint. It is a very smooth paint job but the paint is highly prone to fingermarks. SilverStone placed the sticker with the electrical specifications on the left side of the chassis and small stickers with the unit’s serial number, version, etc., on the right side of the chassis. You can easily tell if the units are the latest or an older version by just looking at their fans: the newer ST30SF V2.0 and the ST45SF V3.0 models have 92 mm fans that barely fit into the body of the PSU, the older versions were using smaller 80 mm fans. 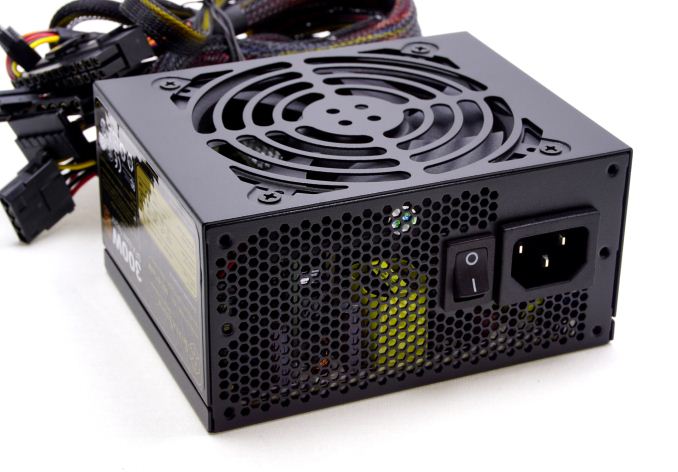 The company logo is once again engraved at the top of the unit, a technique that SilverStone performs on most of their PSU products to date. Despite the very small size of the chassis, the designer managed to find room for a small on/off switch next to the AC cable receptacle. The front of the PSU is plain, with just a hole for the hardwired cables to come out from. The cable arrangement is typical for the price range of these units, with color-coded wires covered in black nylon sleeving. 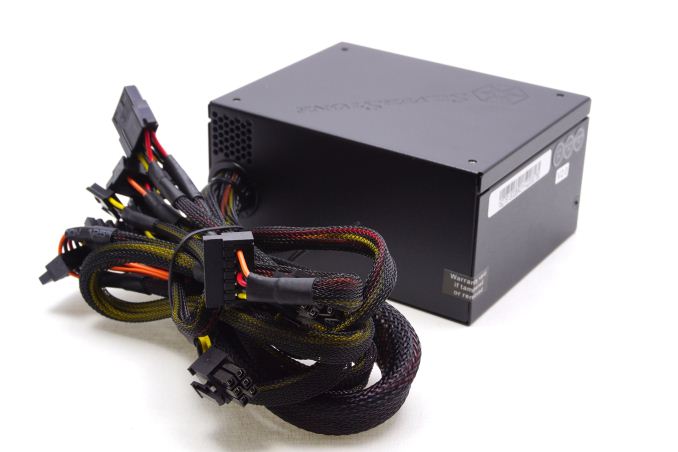 Whereas the ST30SF and the ST45SF externally are practically twins, there are significant differences on the inside of the units, which was to be expected considering that the ST45SF has 50% greater power output over the ST30SF. The first slight difference is their fan. Both of the simple black 92 mm low profile fans are supplied by Globe and are of the same series, but they are different models, with the ST30SF having a S0921512M and the ST45SF having a S0921512H installed. These fans have a “DURO” bearing engine, which is an enhanced version of a sleeve bearing that has been engineered for longevity. Their difference is that they have different speed ratings, with the former having a maximum speed of 2500 RPM and the latter of 3000 RPM.

A quick look on the inside reveals that both units share the same OEM and are based on the same platform, however there are great differences on the sizing of their components. Regardless of the electronic component sizes, it is worthwhile to mention that the main heatsinks remain identical, hinting that the extra cooling required to dissipate the higher energy losses of the ST45SF will be coming from its more powerful cooling fan. High Power is the OEM behind these two PSUs, a company mostly reputable for their balanced performance-to-cost designs. 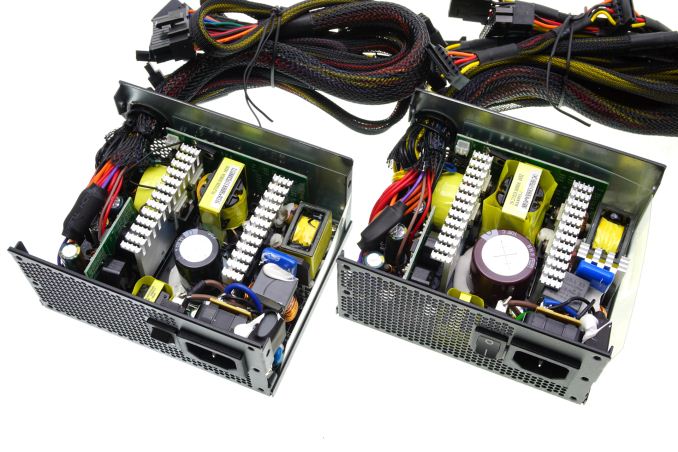 The core design of the ST30SF/ST45SF is relatively simple technologically, with the designer obviously striving to deliver reliable, high quality power without caring about maximizing the product’s efficiency. Both units share the same components up to the input conversion bridge, with a filtering stage consisting of four Y capacitors, two X capacitors and two filtering inductors. The only difference here virtually is that the input conversion bridge of the 450W version has its own heatsink whereas the bridge in the 300W version has no heatsink at all. 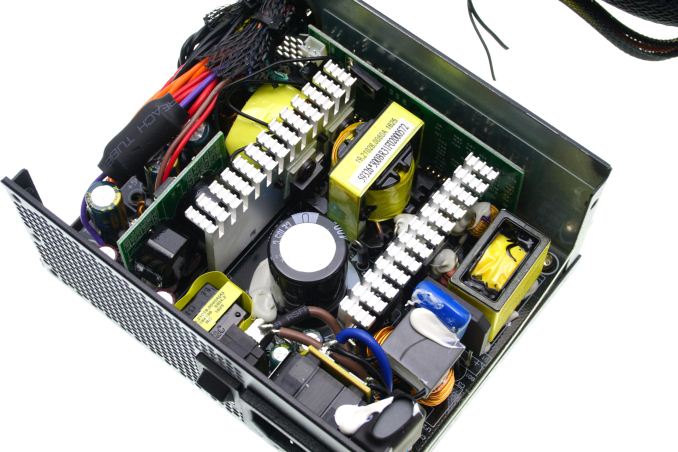 From here on, the design of both units remains the same but the size of the electronic components, both active and passive ones, differs greatly. The most apparent difference is the primary APFC capacitor, with a 180μF/400V capacitor in the ST30SF and a nearly a twice as large 330μF/400V capacitor in the ST45SF. Both are supplied by Japanese companies, Nichicon and Nippon Chemi-Con respectively. The smaller electrolytic capacitors in both units are supplied either by Nippon Chemi-Con or by Teapo, which is a good quality selection of products for cost-efficient PSUs. 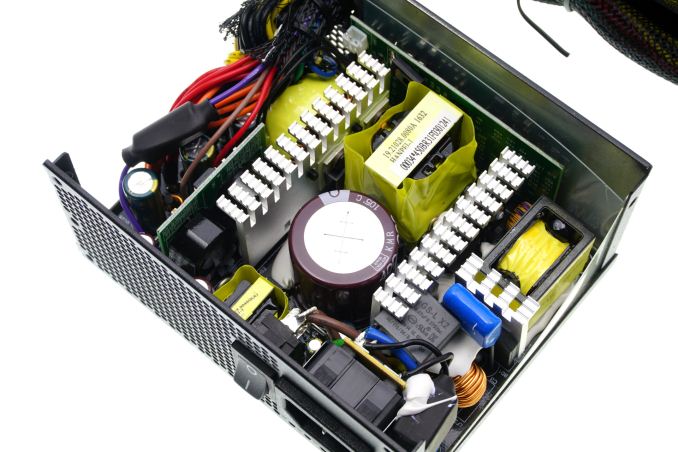 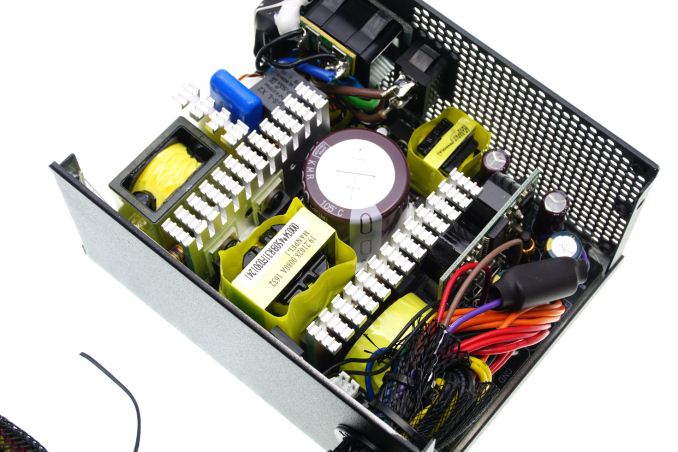 Two transistors on the primary side of the transformer form an asymmetric half-bridge inversion stage and four transistors on the secondary side form the synchronous rectifier for the 12V output. The 3.3V and 5V outputs are generated by DC-to-DC circuits found on the small vertical PCB. Despite the presence of the DC-to-DC conversion circuits and the synchronous rectifier, these units only reached up to an 80Plus Bronze certification, hinting that we might be dealing with high internal temperatures at higher outputs.