FLIR One Thermal Imager Gets an Update, New Infrared Cameras with Lepton Inbound 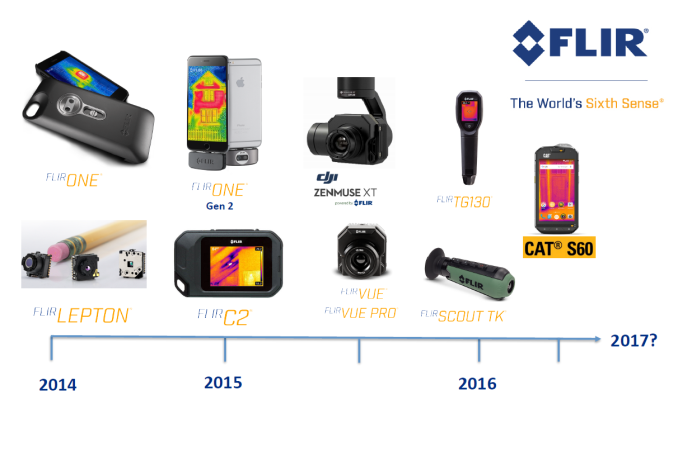 Over the last couple of years, thermal imaging has become more accessible to the average consumer due to development of low-cost infrared sensors / microbolometers. FLIR was one of the first to make a breakthrough in this segment with the low-cost Lepton sensor. The first version with a resolution of 80x60  was introduced to the market in the FLIR One Thermal Imager for iPhone 5/5s. After a year, FLIR added a 160x120 version to the Lepton portfolio, and also used it in the second-generation FLIR One Thermal Imager (separate versions for Android and iOS). The first-generation Lepton sensor also found a place in the CAT S60 rugged smartphone.

At CES 2017, FLIR is launching five different infrared cameras, all of which are based on sensors belonging to the Lepton family. The five cameras fall into three categories:

The FLIR One and FLIR One Pro are meant to be used in conjunction with a smartphone. They come in two variants - one for iOS (with a Lightning connector), and the other for Android (with a USB Type-C connector). While the FLIR One is meant for the casual user / first-time thermal camera owner, the Pro version is meant for professional use-cases. Both of them feature an adjustable connector to ensure a snug fit against any compatible smartphoe model with or without an installed protective case. The following comparison table brings out the differences between the FLIR One Gen 3 and FLIR One Pro. 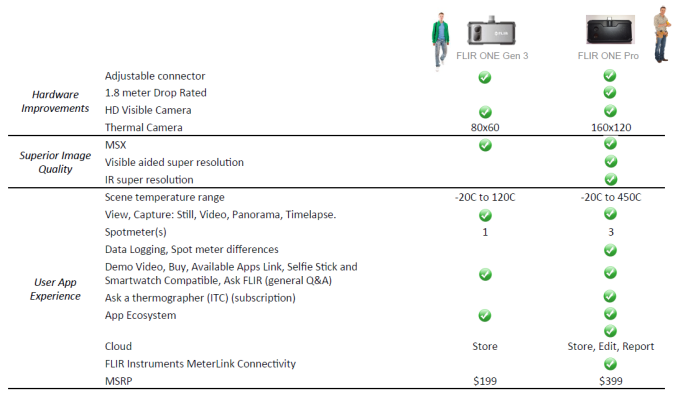 The FLIR One Gen 3 and FLIR One Pro are available for pre-order today for $199 and $399 respectively.

The FLIR Duo and Duo R  are meant for use with drones. Both of them use the 160x120 resolution Lepton sensor. The availability of a HD video camera in the units ensure that MSX is available (FLIR's proprietary blending of live images with thermal ones to provide more actionable results to the end user). There is a microSD card slot on the cameras, as well as mini-USB and micro-HDMI outputs. Real-time remote control of the camera operations is also possible with a smartphone app communicating over Bluetooth. The camera also integrates with MAVLink-compatible flight controllers. 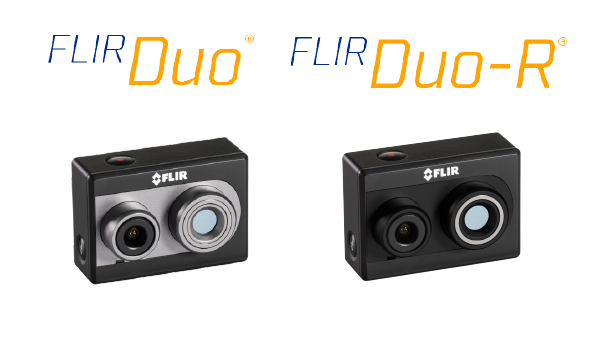 The Duo R includes radiometry - i.e, the thermal sensor is calibrated to provide more accurate temperature readings (a tolerance of +/-2%, as compared to more than +/-5% with the non-radiometry version). The Duo has a MSRP of $999, while the Duo R retails for $1299. Both models are available for purchase today.

The FLIR C3 is a standalone product meant for professional use-cases where ruggedness is important (such as home inspections and building maintenance). In that respect, it is somewhat similar to the FLIR One Pro smartphone accessory. However, unlike the FLIR One Pro, this is a completely standalone device with its own Wi-Fi radio, 3" touchscreen, and firmware running completely on the processor / microcontroller inside it. Curiously enough, despite the FLIR C3's use of the first-generation Lepton sensor (80x60), it offers full radiometry for a more accurate analysis with FLIR Tools offline. However, it only supports scene temperature range of -10C to 150C, while the FLIR One Pro does -20C to 450C. On the other hand, the thermal sensitivity in the C3 is greater (allowing for detection of subtle temperature variations). 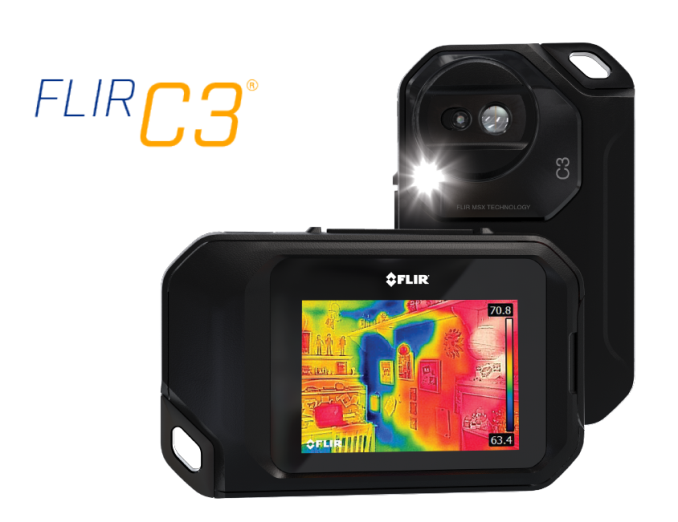 FLIR indicated that these differences could be attributed to the ability to offload some of the processing tasks in the FLIR One Pro to the mobile phone's app processor. The FLIR C3 is slated to become available later this quarter for $699.

It is great to see an increase in the number of thermal cameras using the Lepton sensors. Even though export restrictions put a limit on the video frame rate of these sensors at 9 Hz, it is  not an issue for the use-cases that these cameras target.

FLIR's competition for these cameras comes in the form of Seek Thermal's $500 CompactPRO (going directly against the FLIR One Pro) and the $700 RevealPRO (going directly against the FLIR C3). FLIR does have the MSX advantage and undercuts the CompactPRO's price point by $100 for the FLIR One Pro. The FLIR One Pro also comes with the more future-proof USB-C port (though the Seek Thermal's micro-USB port can easily be used with an appropriate USB-C adapter). However, Seek Thermal uses a 320x240 resolution thermal sensor in both of the above products, which is 2-4x more than what the Leptons offer. Additionally, the Seek Thermal units have been shipping for a few months now.

The past couple of years in the thermal imaging market have been quite interesting. It looks likely to continue in the near future with the array of products being brought to the market by FLIR and Seek Thermal.