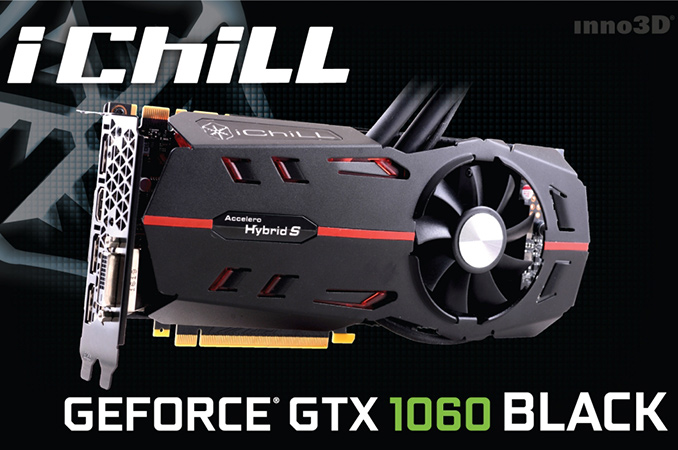 Inno3D has expanded its lineup of video cards based on NVIDIA’s GeForce GTX 1060 graphics processor with an add-in-board featuring a hybrid cooling system using a closed loop liquid cooler. The graphics card comes with a factory-overclocked GPU, whereas the advanced cooler promises some additional overclocking potential for those who plan to squeeze all of the juice out of a GP106.

The Inno3D iChill GeForce GTX 1060 Black is built upon a PCB with a proprietary custom design that is longer compared to that of NVIDIA's reference design and comes with a pre-installed Arctic Accelero Hybrid S AIO cooling system, featuring a 120-mm heat exchanger with a fan. The GP106 GPU runs at 1569/1784 MHz (base/boost), which is a bit higher compared to NVIDIA’s reference cards but is in line with Inno3D’s other factory-overclocked boards based on the same processor. The board is equipped with 6 GB of memory running at 8.2 GT/s and has five display outputs (Dual Link DVI-D, HDMI 2.0b, 3x DisplayPort 1.4). As for power, the card requires an 8-pin auxiliary PCIe power connector.

NVIDIA’s GeForce GTX 1060 (GP106) graphics chip is popular both among makers of video cards (AIB partners) as well as end-users, as referenced by recent numbers by Jon Peddie Research. Large suppliers of AIBs usually have four or more graphics solutions/cards based on the GP106 in their lineups. Nonetheless, Inno3D seems to be the first company to offer GeForce GTX 1060 with a hybrid air and liquid cooling system. The GP106 graphics processor is a rather good overclocker: with NVIDIA’s own cooler its frequencies can be increased by 200 MHz, whereas with a more advanced air cooler it can run at over higher clock-rates (check our review for more details). 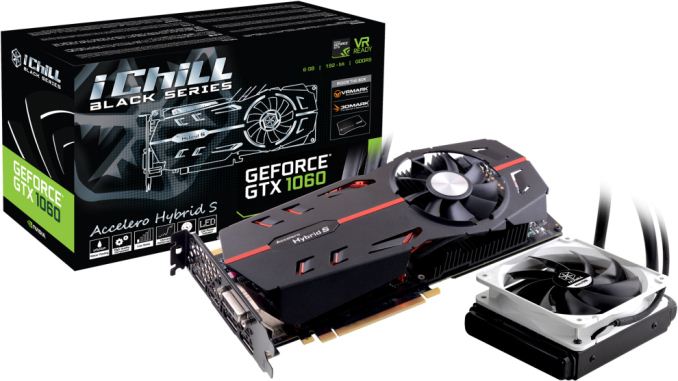 Theoretically, Inno3D’s hybrid cooling system should provide more overclocking headroom compared to air coolers. In this case, the question is how significant that additional headroom is or if the average chip can support it. That being said a better cooling system also means lower temperatures in general and a potentially longer lifespan. Moreover, the hybrid cooling system may also be a bit quieter than inexpensive air coolers, but it requires more space inside the PC.

Inno3D did not reveal recommended price for the iChill GeForce GTX 1060 Black graphics card, but we imagine that it is going to be higher than the MSRP of a typical GeForce GTX 1060 6 GB product, which is $249.