In this section, we mainly look at benchmark modes in programs used on a day-to-day basis, i.e, application performance and not synthetic workloads.

First off, we have some video encoding benchmarks courtesy of x264 HD Benchmark v5.0. This is simply a test of CPU performance. As expected, the higher turbo frequency of the Core i5-5300U in the Logic Supply ML100G-30 pushes down the Zotac ZBOX CI523 nano to the second place amongst the PCs considered for comparison. 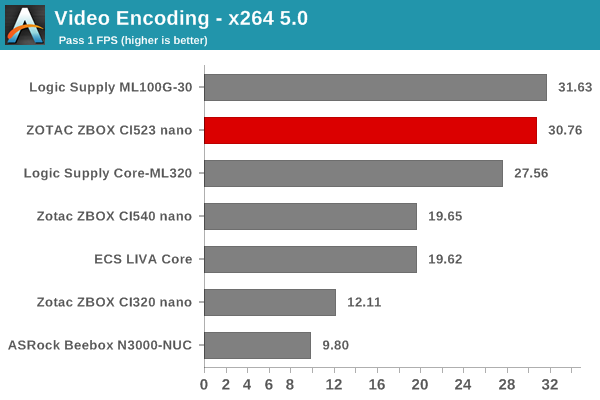 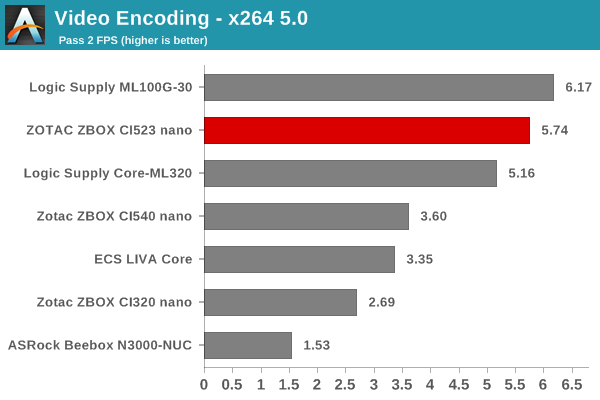 7-Zip is a very effective and efficient compression program, often beating out OpenCL accelerated commercial programs in benchmarks even while using just the CPU power. 7-Zip has a benchmarking program that provides tons of details regarding the underlying CPU's efficiency. In this subsection, we are interested in the compression and decompression MIPS ratings when utilizing all the available threads. Again, the higher turbo clock in the ML100G-30 helps it come ahead of the CI523 nano. 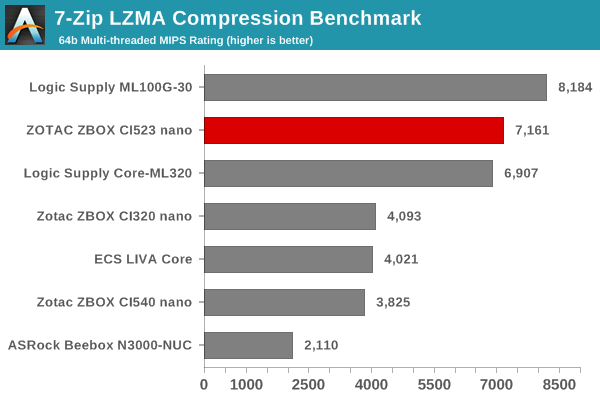 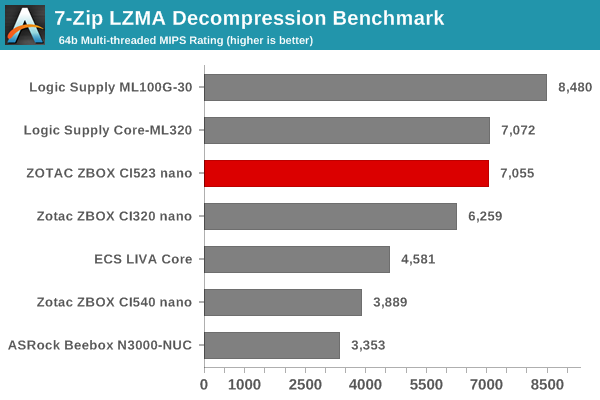 As businesses (and even home consumers) become more security conscious, the importance of encryption can't be overstated. CPUs supporting the AES-NI instruction can accelerate the encryption and decryption processes. The Core i3-6100U does have AES-NI support. TrueCrypt, a popular open-source disk encryption program can take advantage of the AES-NI capabilities. In the graph below, we can get an idea of how fast a TrueCrypt volume would behave in the ZOTAC ZBOX CI523 nano and how it would compare with other select PCs. This is a purely CPU feature / clock speed based test. 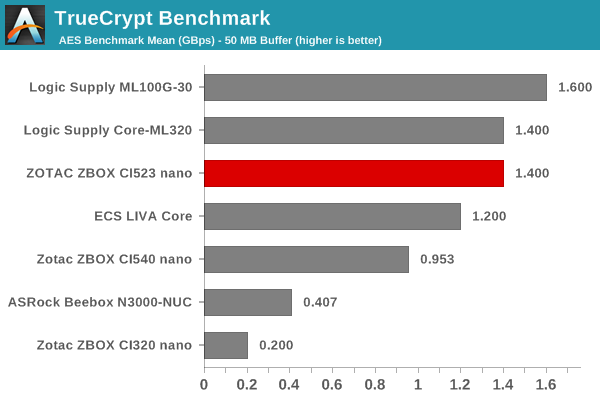 Agisoft PhotoScan is a commercial program that converts 2D images into 3D point maps, meshes and textures. The program designers sent us a command line version in order to evaluate the efficiency of various systems that go under our review scanner. The command line version has two benchmark modes, one using the CPU and the other using both the CPU and GPU (via OpenCL). The benchmark takes around 50 photographs and does four stages of computation:

We record the time taken for each stage. Since various elements of the software are single threaded, others multithreaded, and some use GPUs, it is interesting to record the effects of CPU generations, speeds, number of cores, DRAM parameters and the GPU using this software. 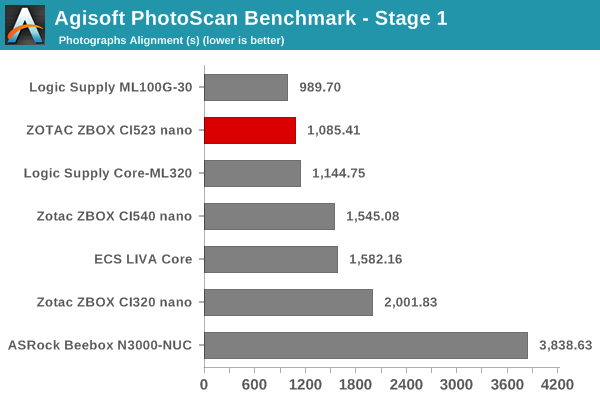 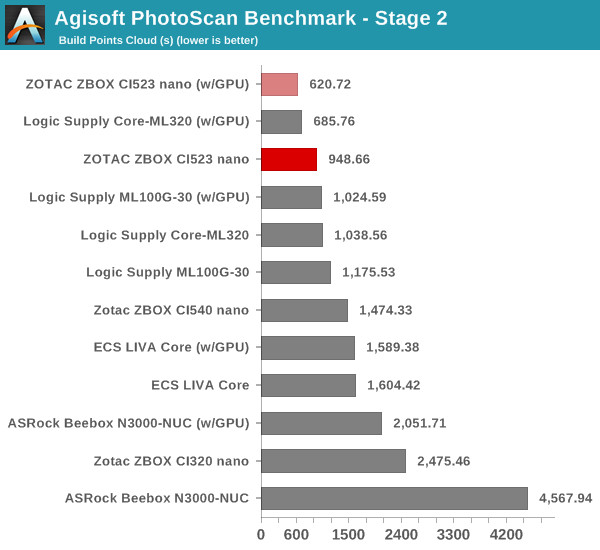 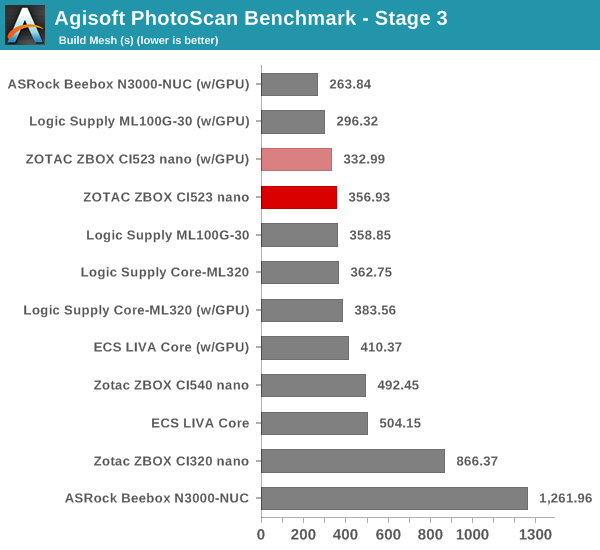 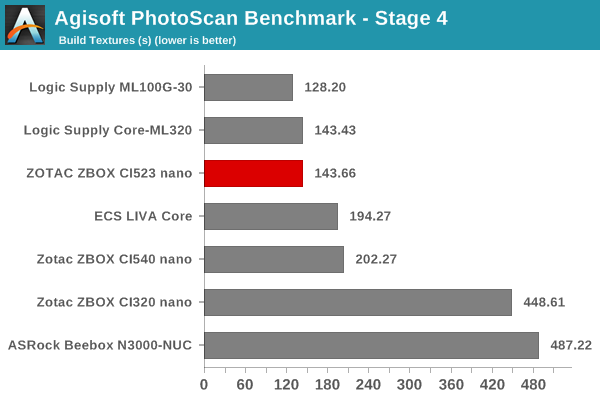 Wrapping up our application benchmark numbers is the Dolphin Emulator benchmark mode results. This is again a test of the CPU capabilities. Even though the ZBOX CI523 nano comes out on top, there is not much separating it from the Broadwell-U Core i5-based ML100G-30 and Haswell-U Core i5-based Core-ML320 industrial PCs from Logic Supply. 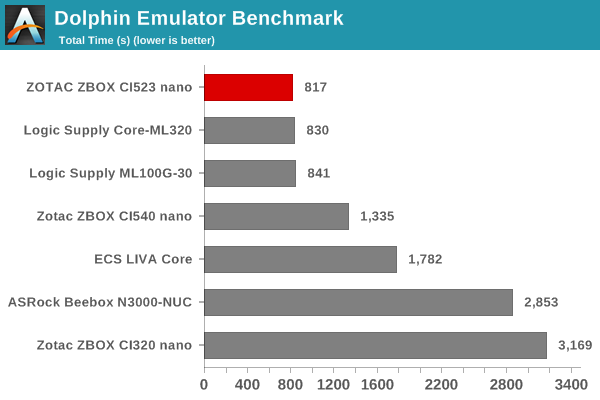