A Visual Guide to the iPhone 5 on T-Mobile 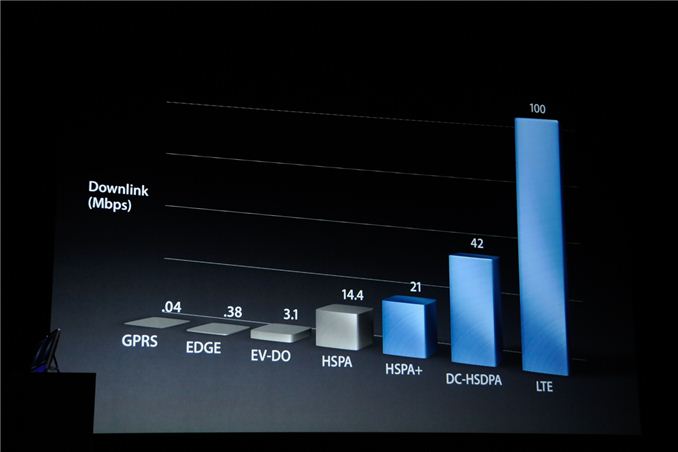 This is normally Brian's beat but with him busy putting the finishing touches on his review of HTC's One, I thought I'd help out. We're still seeing (and hearing) a lot of confusion about what T-Mobile announced earlier this week with regards to existing and future iPhone support on its network. Brian already went through all of this in his excellent article on the topic, but seeing continued confusion I thought I'd whip up a few diagrams to help explain.

The easiest question to answer is will existing AT&T iPhone 5s that have been unlocked work on T-Mobile's recently deployed LTE network. The answer is an emphatic yes. The original AT&T iPhone 5 was designed to work on LTE band 17 (700MHz) and band 4 (1700MHz), a superset of T-Mobile's LTE deployment (band 4). If you're in one of the few areas with T-Mobile LTE service and an existing unlocked AT&T iPhone 5, the combination will work just fine. Apple will need to release an updated carrier bundle (.ipcc file) for the phones, which I assume is coming soon - but there's no hardware change required. 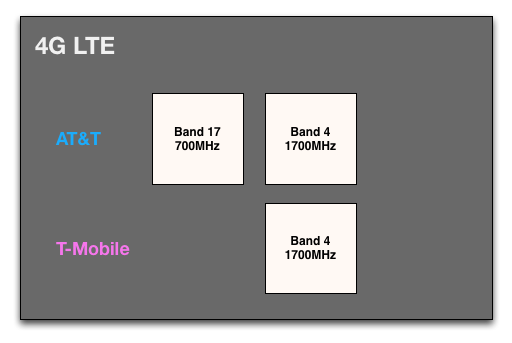 The new unlocked iPhone 5 that will be available via T-Mobile doesn't add any additional functionality in this case. As you can see, both A1428 revisions support the same LTE bands.

Where it gets somewhat complicated is in the 3G WCDMA discussion. I emphasize somewhat because it's really not that hard to understand. The complexity comes from the fact that there are a number of names and acronyms here that aren't well understood by most who aren't of Klug-descent. If we focus on the frequency bands themselves and ignore their common names, things are a bit easier to understand.

The original AT&T iPhone 5 supported 3G operation on band 5 (850MHz) and band 2 (1900MHz). Only band 2 overlaps with T-Mobile's network. The problem with 1900MHz on T-Mobile is that the majority of that spectrum is used for 2G and hasn't yet been migrated over to 3G. The bulk of T-Mobile's 3G currently exists in band 4 (1700MHz uplink, 2100MHz downlink), which isn't supported on the existing AT&T iPhone 5.

After April 12th, the new unlocked A1428 iPhone 5 with band 4 WCDMA support will begin rolling out and should have much better coverage on T-Mobile's 3G network as a result. The diagram and toggles below help illustrate this: 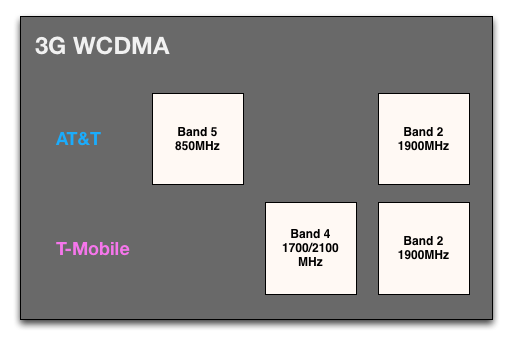 The original A1428 iPhone 5 lacks band 4 support, which means it'll only support WCDMA on band 2. The only problem here, as I mentioned above, is that T-Mobile's 3G deployment on band 2 isn't ubiquitous - so in many cases you'll fall back to 2G/EDGE speeds. The new iPhone 5 simply enables band 4 WCDMA support.

There's one other benefit to the new iPhone 5. DC-HSPA+ (42Mbps max downlink) is now supported on all bands as well. Although it was never (and likely will never ever be) used by AT&T, DC-HSPA+ was a feature of the iPhone 5. T-Mobile on the other hand does use carrier aggregation on WCDMA in some markets and the new A1428 will benefit from higher speeds in those situations.