Putting the Antec GX700 together was remarkably easy. Someone over there has been paying attention, because for the most part we're approaching a Corsair level ease of use. The GX700 may be low on build quality, but it's fairly high on polish and usability, so as long as you're not planning to start beating on it, there's a lot to like here.

The one thing Antec didn't do was extrude the motherboard standoffs or include a mounting post, so it's business as usual, installing standoffs yourself and then popping the motherboard in. Some users are going to want to take note that unlike many other cases, the expansion slots, I/O cluster, and fan exhaust are on the same level instead of the fan exhaust being out further. This may potentially complicate installing a closed loop cooler, at least to the rear 120mm fan mount, as some horizontal clearance is lost.

Getting the drives in is easy enough. The GX700 uses snap-on plastic drive trays that aren't really any worse quality than I've seen in more expensive cases (at least, cases that aren't Fractal Design), and the clamps for the 5.25" drive bays are actually remarkably firm. There are quirks, though. The drive trays slide in from the rear of the botherboard tray instead of above like most cases, and the top 5.25" bay isn't actually usable for anything except maybe a card reader. The shields come out by just opening the clamps and popping them out, but take a look at what's hiding behind the top shield:

The cabling for the fan controller and I/O at the top of the case blocks you from installing an optical drive here. Unfortunately this means that any optical drive you do install is going to wind up breaking up the appearance of the case somewhat. It's not a huge deal, but it's something that could've been avoided. Realistically Antec may have been better blocking off this area entirely. We don't need four 5.25" bays anymore anyhow (we really only need two at most these days).

Installing the remaining components is pretty much a cake walk with one more hiccup along the way. To save money, the GX700 doesn't include expansion slot covers, instead opting to use shields punched out of the case's shell. When you see how easily these come out, you'll realize just how thin the steel used for the GX700 actually is, but I had no trouble lining up the GTX 560 Ti we use for testing, or the power supply for that matter. 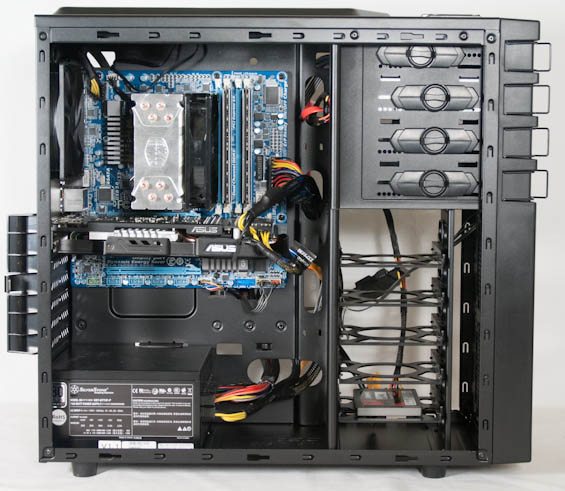 Cabling was also very easy, except the HD audio lead seems to be just an inch too short. I actually wasn't able to plug it in to the HD audio header on the motherboard, and on an ATX board it would probably be roughly two inches shy. This seems like kind of a silly oversight, and I do hope someone over at Antec realizes they shortchanged this and fix it, because the header on our board isn't at all unusual in its placement on the bottom edge of the board.

The GX700 does come together reasonably well despite the odd hiccups. There's a lot I'm willing to forgive in a design that's this cut down, although the HD audio cable being too short kind of leaves a bad taste in my mouth. That's a simple, easy thing to do, and it's surprising that Antec would miss a detail like that. Still, the case lends itself to a very clean installation, and that's always a plus.