Picking up from where we left off with Intel, earnings week has continued to roll along with most of the major tech companies having reported their Q3 earnings. As we noted in our look at Intel’s earnings, Intel is the traditional bellwether for the PC industry, and for Q3 that bellwether was reporting that the PC market had unquestionably grown weaker, and that Q4 was to be cast into even more doubt. As one of the strongest PC-centric tech companies Intel has significant exposure to any weakness in the PC market, but at the same time they’re also in the best position to weather whatever may come. For their partners and their competitors however, a weak market can be a significantly bigger drain.

This brings us to today’s major PC earnings announcement: AMD. AMD is by far the weaker CPU manufacturer, and while it has some level of diversification through its GPU division and embedded CPUs, like Intel they’re still significantly exposed to the PC market, setting the stage for a rough quarter. Furthermore rumors began circulating that AMD was looking at another round of layoffs – rumors that have seen been proven at least partially correct – which would indicate that AMD was struggling even more than anticipated. With these factors in mind there has been a great deal of anticipation for AMD’s Q3 earnings call, so let’s dive right in.

For Q3 of 2012 AMD reported $1.27B in revenue, with a net loss of $157M. Unfortunately for AMD (but not unexpected) this is a significant drop in both revenue and net income on both a quarterly and yearly basis, having furthermore pushed AMD back into the red after turning a slight profit in Q2. Compared to AMD’s Q3 2011 results, revenue is down approximately $420M, a nearly 25% drop; net income meanwhile swung from positive $97M to negative $157M, a shift of nearly $250M. Finally, AMD’s gross margin was an abysmal 31%, well below last year’s gross margin of 45%, which is generally where AMD needs to be to turn any kind of profit.

The single biggest factor for this sudden change in fortunes is a $100M inventory write-down AMD had to take this quarter for unsold Llano inventory. In Q3 of 2011 Llano was the biggest factor in AMD turning a profit, but a year later those chips have been superseded by AMD’s new Trinity APU. Notably AMD is calling this a write-down and not a write-off, so it looks like they’re accounting for the loss of value of these APUs (i.e. they’ll have to sell them at lower prices than they planned for), as opposed to simply throwing out $100M in Llano APUs. Nevertheless, even if AMD had not taken the write-down they still would have lost around $50M for the quarter, so while Llano inventories were a big problem for AMD they are not the sole reason for AMD’s rough quarter.

Breaking down AMD’s numbers for the quarter, AMD’s Computing Solutions (CPU/APU) segment booked $927M in revenue, for an operating loss of $114M. This represents a 28% decline in revenue on a yearly basis, and like AMD’s overall profitability a flip from an operating income to an operating loss for the division. AMD looks to have been hit twice here; not only are overall sales lower, but their ASPs were also down.

AMD doesn’t completely break down their CPU revenue by processor line, but they have stated a few facts. For client revenue (i.e. non-server) desktops were cited as being especially hard hit by lower sales volumes and ASPs. As for notebooks, AMD has stated that Trinity’s share of AMD notebook shipments has just surpassed 30%, which implies that the majority of AMD’s notebook APUs are still Brazos and Llano.

Meanwhile AMD’s Graphics division fared much better. For the quarter the Graphics division booked $342M in revenue, and once again turned a small but consistent operating income of $18M. This represents a 14% reduction in revenue over Q3 of 2011, while operating income has actually grown by $6M. AMD attributes the lower revenue to lower OEM sales, but noted that channel sales (i.e. retail) are higher than at this point last year. Interestingly despite the loss of revenue AMD’s GPU ASPs were also up compared to Q2, which is why they turned a greater operating income on lower revenues. Unfortunately as we’ve seen time and time again with AMD, while their Graphics division can consistently turn a small profit, at only 1/3rd the revenue of their Computing Solutions division it’s not nearly large enough to offset the losses AMD has run there.

With all of that in mind, as bad as AMD’s Q3 was, much like Intel their projections are for Q4 to be even worse. Unlike Intel AMD doesn’t provide gross margin guidance, but for their revenue guidance they are predicting a further 9% (+/- 4%) decline in revenue.

This brings us to perhaps the most depressing news of the day: more layoffs. As part of their restructuring plan to return to profitability, AMD will be laying off nearly 15% of its workforce in Q4. They expect to take an $80M charge on this for severance payments, in return for $190M in projected savings in 2013. AMD is being intentionally vague about where these layoffs will come from, and it’s entirely possible they haven't completely figured that out at this time, so at this point it’s impossible to say if this will primarily hit one division (e.g. GPUs) or if it will be spread around all of AMD’s major divisions.

The layoffs are coming as part of a greater restructuring for the company, which will see them accelerating their previously announced shift away from the PC market in favor of mobile, servers, and semi-custom embedded chips. As the PC market continues to weaken – and AMD expects it to remain weak for several more quarters – they will be speeding up this transition in order to derive more of their revenue from non-PC sources sooner. Ultimately AMD wants to be in a position where 40-50% of their revenue comes from these fast-growing markets, with a specific goal of 20% of their revenue coming from semi-custom embedded APUs by Q4 of 2013. 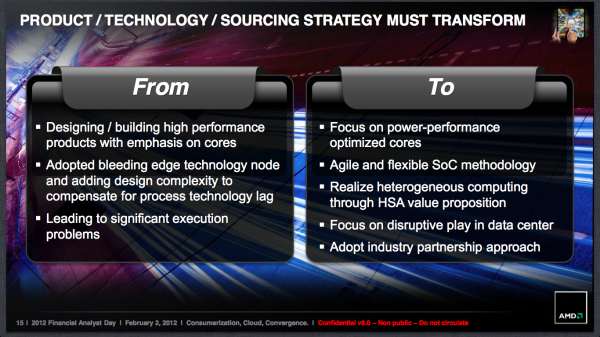 To get there AMD will be simplifying their development cycles and increasing their focus on building reusable IP blocks, in essence transitioning to building their APUs in a more SoC-like fashion. AMD has been very careful to reiterate that they’re still an engineering company, and that graphics in particular are a cornerstone of the company. But much like the vague nature of the layoffs they are not making it clear what projects and products are being deprioritized or discontinued in order to achieve this simplification. What is clear is right now is that AMD will be reusing more IP and designs when they can to avoid having to undertake costly research and development.

Finally, AMD has also spent a bit of time talking about 2013 and beyond. On a financial side of things AMD’s goal is to get their operating costs to the point where a quarterly revenue of 1.3B would be their break-even point, which is part of AMD’s attempt to “reset” the company to survive on what would ultimately be lower margins. Meanwhile on the product side of things, silicon for Kabini (their 28nm Brazos replacement) is already back and AMD is working on a H1 2013 launch for that. As it stands nearly 85% of AMD’s current business is focused on the “legacy” PC market, so AMD is looking to shift into high margin, fast growing markets like tablets as soon as possible, which is where products like Kabini will take them.