There have been a couple of manufacturers that historically have hit my pet peeves when it comes to notebook design. Clevo and Acer both have dire keyboards that they frustratingly cling to even in the face of the kind of progress Dell and HP tend to get swept up in, and Toshiba seemed to have invested whole hog in glossy plastic for the longest time. Mercifully, while Clevo and Acer still have those same awful keyboards, Toshiba got the hint from the success of the Portege R700, and has proven themselves a little more agile and willing to change.

The end result is an aesthetic that feels a little clunky, but is at least a major step in the right direction. While smooth glossy plastic is still present (particularly in my most hated of places, the screen bezel), it's used largely more as an accent than a style on the M645. The lid, palmrests, and area around the keyboard are all black and feature a pleasant patterning that's comfortable to use. In the most technical sense this is still glossy plastic, but it's heavily textured in such a way that's much more pleasing—it's the same look as seen on the A660-series laptops we've reviewed in the past, only in a smaller chassis.

In keeping with the times and proving that white is the new blue, Toshiba uses white LEDs for nearly all illumination on the M645, including indicators and the keyboard backlighting, with orange as a secondary color for the indicator LEDs on the front rim of the notebook. I can't complain; there are reasons why blue LEDs caught on the way they did, and the white ones are no different. They're just pleasing to look at. 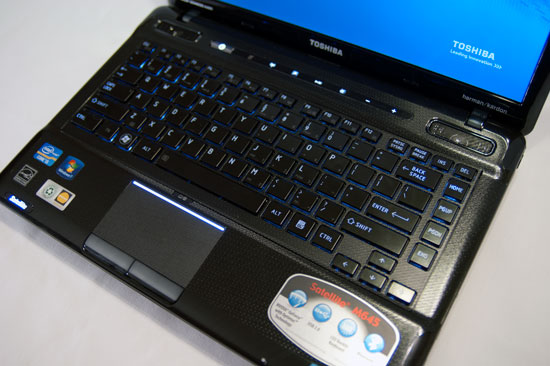 As for the keyboard itself, the chiclet-style seems to be in vogue right now, and that's fine. Toshiba has a solid layout that's easy to use, and the flex that's present is fairly minimal. I'm disappointed that glossy plastic is used for the keys as it produces an odd texture when you slide your fingers across them, but at this point I just appreciate the progress compared to the big, flat, borderline-slick keys that permeated last generation Toshiba notebooks. At the moment the only manufacturer that seems to consistently nail keyboard designs to near-flawlessness is Lenovo; HP's double-high left and right arrow keys on their modern keyboards are downright bizarre, and Dell seems to still be trying to figure out exactly what kind of key surfaces to use. It's strange the kind of alchemy that continues to occur when it comes to keyboard design; the one part of the notebook that should be seeing the least change over the decades continues to see reinvention. But I digress; Toshiba's keyboard on the M645 is a major improvement on its predecessors, and a change in materials would finish the job.

Touchpads are also tricky things, but Toshiba wisely gets the texture right. These seem to be a matter of taste, but I've found two dedicated buttons along with a mildly textured surface is oftentimes the right call for me, and I had no trouble using the touchpad on the M645. The dedicated touchpad toggle is a constant and appreciated inclusion.

Unfortunately there are still a couple of places where I feel like Toshiba could stand some improvement in their overall designs. The M645 feels curiously bulbous compared to notebooks from competitors, machines that have generally gotten progressively sleeker and eschewed these rounded corners. That's a minor complaint; my major gripe still lies with the use of glossy plastic. It just doesn't belong on the bezel, but at least it's gradually phasing out of the market. The capacitive control strip above the keyboard also feels passe, and most people I know would rather use actual physical buttons than touch-based controls.

Finally, on the feature side, Toshiba made too many perplexing trades here. I appreciate the inclusion of a USB 3.0 port and a Blu-ray drive, and dedicated graphics in a 14-inch form factor are still all too rare in the mainstream notebook market, but why no gigabit ethernet? I'm also sad to see Samsung's hard drive division get sold off to Seagate while Toshiba's continues to plug away at producing mediocre notebook drives. Maybe it's a cost-saving measure, who can say? However, my experience with Toshiba drives is that they've always been the slowest of the slow (alongside Fujitsu). 640GB of space is generous, but most users would probably be willing to sacrifice some of that capacity for at least a higher spindle speed. Notebooks in the price bracket Toshiba targets with the M645 almost always include 7200RPM drives as a matter of course, making the dog slow 5400RPM drive in this notebook an outlier.