I remember falling in love with the original MacBook Air. It wasn’t the styling that won me over, but rather the combination of performance, form factor and battery life. I needed a notebook fast enough for me to get work done when necessary, but with long enough battery life to last me through a trip across the country. Back in 2008, the MacBook Air was the perfect solution to that problem.

The original MacBook Air had three main issues. It was hot, the 1.8” HDD was unbearably slow, and it shipped with 2GB of memory that you couldn’t expand to 4GB. It was a great machine for writers as you could open up TextEdit and hammer out a document for five hours straight. And when you needed to, you had the greater-than-Atom performance to get more intensive work done.

What prompted me to stop using the MacBook Air was the second generation unibody MacBook Pro. Apple ramped up battery capacity enough where I could get much better battery life and performance out of the MacBook Pro. The combination of the two was enough for me to let my MacBook Air collect dust. I hardly ever used it after that point.

Apple updated the MacBook Air hardware since its original release, but the updates were nothing spectacular. Apple moved from an Intel supplied chipset to one made by NVIDIA, and SSDs eventually became standard issue. Battery life didn’t get any better and memory sizes never moved beyond 2GB.

Last week Apple announced the biggest upgrade to the MacBook Air since 2008, complete with a redesign, price reduction and improved internals. Let’s start at the redesign.

There Once Was One, Now There's Two

The original MacBook Air was very light on connectivity. It had an angled MagSafe power connector but that was it for visible ports. The right side of the machine was home to three hidden connectors: mini DisplayPort, USB and line out.

The new design forgoes the rounded nature of its predecessor and introduces more angular surfaces toward the rear of the machine. Connectors like flat surfaces so Apple outfitted the new MacBook Air with a pair of USB ports (one on each side) in addition to the MagSafe connector, miniDP out and line out. Everything is fully accessible from the start, nothing is hidden behind any secret panels.

Next to the headset jack on the left side is the integrated microphone. Apple states it is an omnidirectional mic, but its placement is curious given the original MacBook Air had its mic at the top of the screen bezel. The microphone’s left leaning location didn’t negatively impact audio performance in our tests. As long as you’re not sitting to the right of a horribly noisy person/animal/box you should be good to go.

There are of course now two MacBook Airs that make up the family: an 11.6-inch model and a 13.3-inch model. The two have identical port layouts however the 13-inch MacBook Air gets an integrated SD card reader like its Pro siblings.

There’s a 0.6 pound difference between the two models and associated difference in dimensions:

Prices and specs differ as well. The 11-inch starts at $999 while the 13-inch starts at $1299. You can get faster CPUs in the 13-inch, while GPUs and memory options remain the same across the line. SSDs are not only standard but they're the only option for storage on the Airs. Given my infatuation with SSDs, you won't see me complaining. I'll be happy when Apple ships all of its systems with SSDs in their default configurations.

I always like hearing the bad news first so I’ll treat you all no differently. The new MacBook Air not only comes with a meager 2GB of memory, but it’s also soldered onto the motherboard just like in the previous generations.

Now the good news: after two years of complaining Apple has finally added a 4GB memory option. It’s not end user upgradeable, but for an extra $100 Apple will solder 4GB of memory onto the MacBook Air’s motherboard instead of 2GB.

If you’re really just going to be using this thing for writing, IMing and browsing the web - 2GB is fine. If you plan on doing more than that, you should consider spending the $100 on the 4GB upgrade. Right now I’m using 1.46GB of memory. I can edit only a handful of photos in Photoshop before I start swapping to disk. 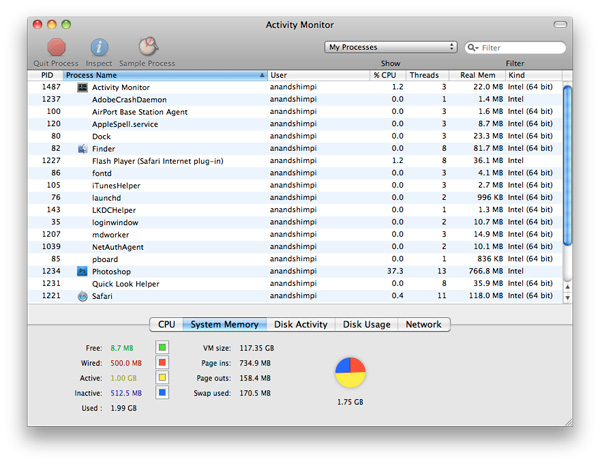 Apple priced CPU upgrades similarly, but there’s a catch. The base $999 and $1299 (11/13-inch) MacBook Airs can’t be the recipient of an upgraded CPU. You have to go to the upgraded 11/13-inch configurations, which are both $200 more expensive before you get the option to upgrade the CPU for another $100. The upgraded models just give you larger SSDs and nothing else, so if you don’t need the space then the seemingly affordable $100 CPU upgrade actually ends up being a $300 upgrade.

If you want my advice I’d stick to the base systems so long as your needs are simple. However if you plan on doing any amount of multitasking or heavy work (e.g. content creation, editing) on this machine I’d recommend at least the $100 memory upgrade to 4GB. And if you plan on keeping the MacBook Air for a while, spring for the upgraded CPU. It’ll make the later years of its life a little more bearable. 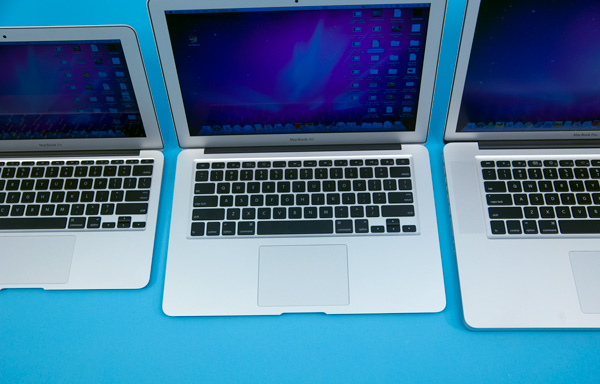 Multitouch gestures are supported by the glass trackpad.

The original MacBook Air didn’t have an optical drive. The new models are no different. When I bought my first Air I actually purchased the external SuperDrive, thinking I’d use it. To be honest, I’ve only used it when doing weird things to the MacBook Air for reviews on AnandTech. I won’t go as far as to say that no notebooks need optical drives, but the absence of one in the MacBook Air isn’t that big of a deal. 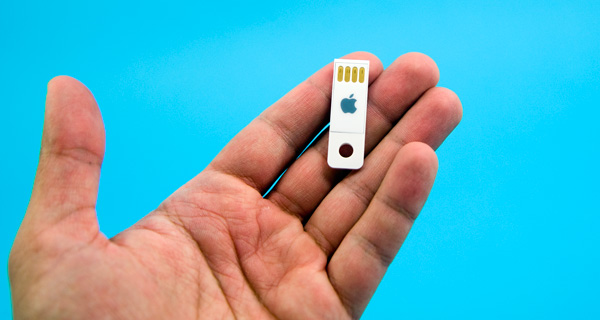 Unlike the original MacBook Air, Apple doesn’t bundle these two puppies with recovery DVDs. In case you get an 8GB USB stick with OS X and all bundled apps on the drive. If you need to restore your machine, pop the USB stick in and hold down the ‘c’ key while you start the Air. Apple was even kind enough to etch the version of the OS and application suite on the USB stick itself in case you accumulate a bunch of these over time. 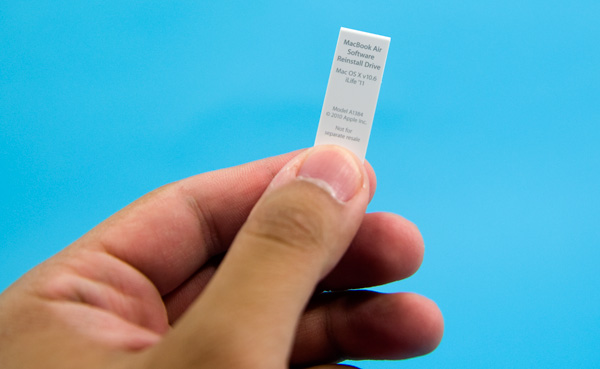 I must say this is the ideal way to distribute OS X recovery software. The USB stick isn’t write protected so you could always do something silly like erase it, but I’m willing to take that risk for the convenience benefit. I expect that next year’s MacBook releases may bundle a similar stick if Apple is feeling particularly forward looking.

Neither of the new MacBook Airs have a backlit keyboard. I do a lot of writing in bed at night and I do miss the backlit keyboard. For touch typists it’s not a problem, but if you switch between the MacBook Air and other computers regularly you’ll find yourself fumbling for the function keys in the dark. I'm guessing this was a cost savings measure.

The top of the screen bezel only has a cutout for the VGA camera, there’s no ambient light sensor. That means you don’t get auto adjusting screen brightness (which some may consider a good thing). 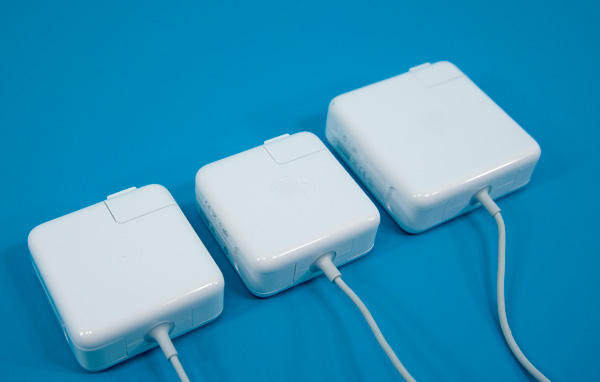 Both Airs come with the same 45W MagSafe power adapter, which just happens to be the same power adapter as the old 2008 MBA (with a new connector of course): 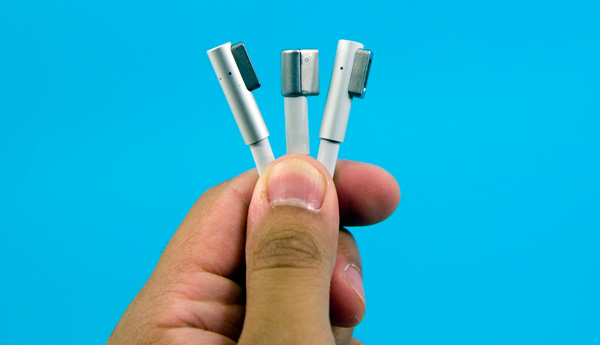 No Flash Installed by Default

So this is weird. The new MacBook Airs are the first Macs to ship in a long time without Adobe's Flash Player plugin installed by default. That's right, if you open your brand new Mac, launch Safari, visit youtube.com and try to watch a video you'll get this screen: 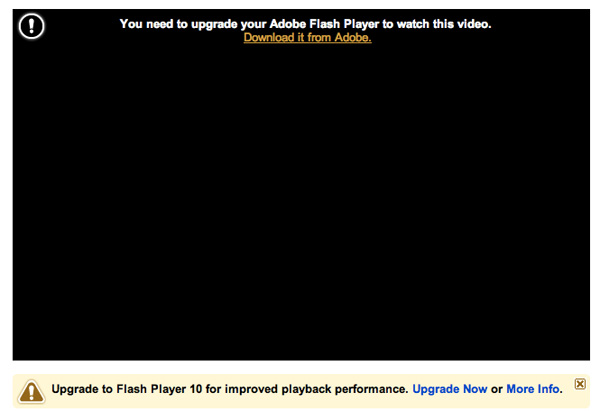 Apple encourages its users to go download the latest version of Adobe's Flash Player to enable the functionality, but this flies in the face of Apple's "it just works" usage model. Watching flash video no longer just works on Macs. You have to go out and download something to make it work. It sounds awfully PC like (gasp!).

Obviously Apple isn't the biggest fan of Flash. The technology isn't supported (and most likely never will be) on iOS. Removing it from the default OS X install makes Apple's intentions clear: it wants Flash dead.

There's also the security aspect. Apple wants to keep its OS as secure as possible and Flash vulnerabilities have been a problem in the past. By not shipping OS X with Flash on it, Apple avoids shipping an old, out of date and potentially vulnerable version of the player software on its Macs. And by forcing users to download the latest version they'll hopefully have a more secure copy on their Macs.

Now whether or not this next bit is a coincidence I'm unsure of. Two of our battery life tests involve loading web pages with Flash on them. My 13-inch MBA sample would throw this error almost every 60 minutes on the dot during the test:

The issue didn't happen on the 11-inch MBA, nor on any of the other MBPs I've run the battery tests on. I've looked around and can't seem to find other reports of Flash being unusually unstable on the new MBAs so it's quite possible that this is an isolated (but unusually repeatable) problem. I've alerted Apple and I'm trying to see if they can reproduce it on any other hardware aside from my 13-inch model. What bothers me is that the the error is very reproducible. I'm going to keep pounding on the system to see if I can figure out what's going on. If I find anything, rest assured I'll publish it here.