ASUS hit on a pretty good design when it debuted the Eee PC Seashell models two years ago. It hasn’t changed much since then, with the overall lines staying about the same. The biggest change in the intervening two years has been the material used—first the super-glossy plastic on the original models, the textured matte plastic on the 1001P, and now the soft-touch plastic on the 1015 series. The 1201N was one of the glossy models, but that’s thankfully been replaced by brushed aluminum. This gives it a pretty hefty, high quality feel. It’s a much more solid feeling system than most other 11-12” ultraportables (*cough* Acer *cough*). There’s little to no flex throughout the chassis, and I actually think it’s better built than some of ASUS’ larger models (the UL80Jt comes to mind).

I wish I could say the same for the keyboard—it’s not great. There’s a fair amount of flex, particularly in the middle. This was pretty disappointing to me, because the last few ASUS keyboards I had sampled, whether Eee PC or regular U-series notebook, had been quite good. Maybe I just got unlucky with my review unit, but the keyboard flex stood out because the rest of the notebook was so solid. As far as other input devices go, the touchpad is pretty much standard; it works without anything to complain about. It’s pretty large, taking up a good 30% of the palmrest area, and the single mouse button (with two sensors underneath, a la U33Jc) gives pretty good feedback, though it might be too “clicky” for some. 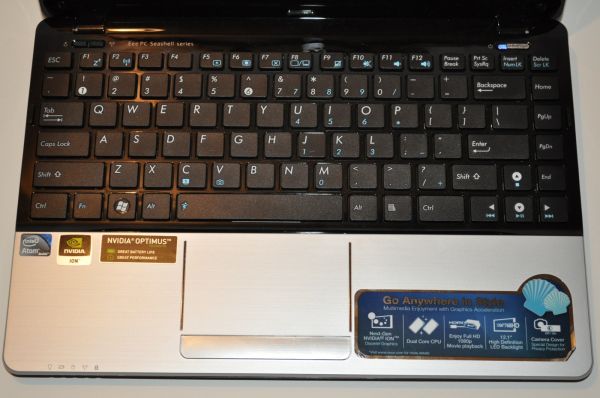 Port selection is basically netbook-standard, plus an HDMI port (thanks to ION). That’s three USB ports, VGA, Ethernet, line in/headphone out, and a card reader, if you haven’t looked at a netbook lately. That’s about all you can expect at this pricepoint. The webcam has the same gimmicky manual shutter over it that the U33Jc has. In my opinion, that’s just one more part to break, but if someone sees value in it, so be it.